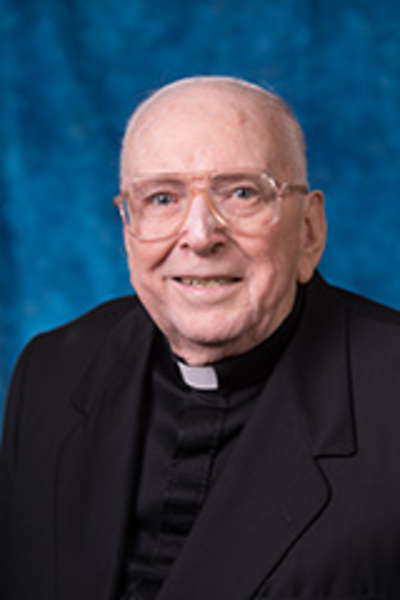 He met the Marianists at St. Michael High School in Chicago, IL. John  made his First Vows on August 15, 1944, and pronounced his Perpetual Vows on July 15, 1948, both at Marynook in Galesville, WI. He was ordained on July 22, 1956 in Fribourg, Switzerland.

Prior to going to the seminary, from 1952, John was a teacher at Don Bosco High School in Milwaukee, WI from 1947-1952. After completing his seminary studies in 1958, he returned to Don Bosco HS as a chaplain and teacher until 1961, when he was asked to serve the former St. Louis Province as Assistant for Religious Life until 1964. He then traveled to Lima, Peru to serve as administrator of Colegio Santa Maria for 4 years.  In 1968 he returned to Chaminade HS in St. Louis, to teach and serve as school chaplain for six years.

In 1974 he began a lifetime of service with St. Mary’s University as professor, chaplain, Chair of the Theology Department, Administrative Vice-President and President of the University. In 2007 he began his semi-retirement, always willing to help in any way possible.

Fr. John had 2 sisters, Marie (Perry) and Carol (Ferrari), both deceased and a brother who died at a very young age. He is survived by nieces and nephews: Suzanne, Mark, Janet, Steve, Dave & Jeff (Perry); and John, Beth, Nora, Claudia & Edward (Ferrari).

9:30 AM Viewing followed by

Mass of Christian Burial at 10:00 AM at Holy Rosary Parish.

Both Services can be viewed on: Facebook.com/HolyRosarySA/ under (Facebook Live)

and after January 5 on St. Mary’s University Webpage.

There will be no reception due to caution for the Covid-19 concerns.

In lieu of flowers, donations may be sent to the